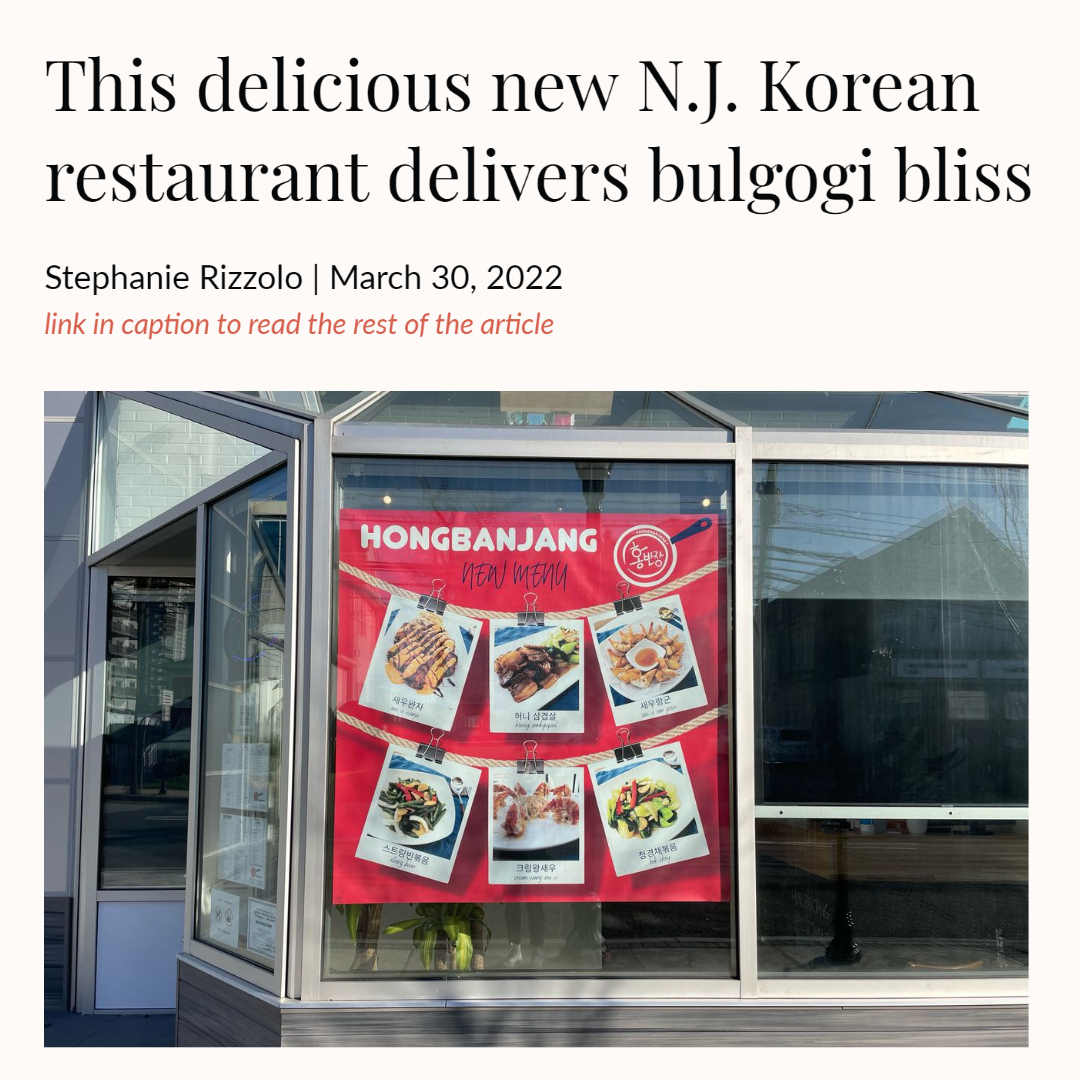 As one of the country’s largest and most vibrant Korean enclaves, Fort Lee isn’t exactly hurting when it comes to authentic restaurants. But just like any town, a newcomer adds a breath of excitement for residents craving new eats.

Hong Ban Jang has served Korean-Chinese cuisine since 1985, first in Palisade Park and now in New Jersey’s Korean epicenter, stashed in the shadow of the George Washington Bridge.

But what exactly does “Korean-Chinese” mean, exactly?

The menu was extensive and broken up into appetizers, rice, noodles, fried, platters and courses (set menus). The lunch menu offers combos and an abbreviated version of the dinner offerings. A caddy full of vinegar, seasonings and hand sanitizer graced every table, and a set of daikon, black bean paste and spicy radish arrived immediately after ordering as a condiment (which served as more of an amuse for me since I was starving). Let’s eat! 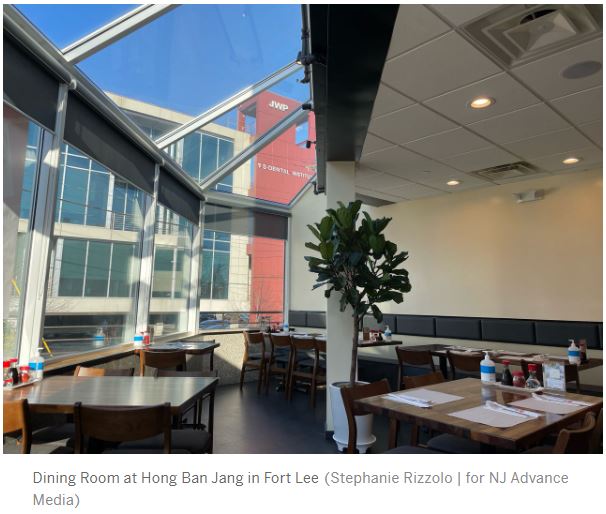 Bright and airy, Hong Ban Jang is surely an inviting space. Sitting on the corner of an oddly shaped building, the dining room is long and narrow with two walls of windows and a skylight. Everything was impeccably set and clean, all the way down to the paper wrapped metal spoons and pristine Korean shears for cutting your noodles. I was immediately greeted with hot tea and iced water, which I thought was a nice touch. Calm, pleasant music was playing, which enhanced the overall experience.

Diners were scattered about, with one common thread that was impossible to ignore: the black bean noodles. Every single table was enjoying them. I felt as though this was a clear sign. More on those noodles to follow. 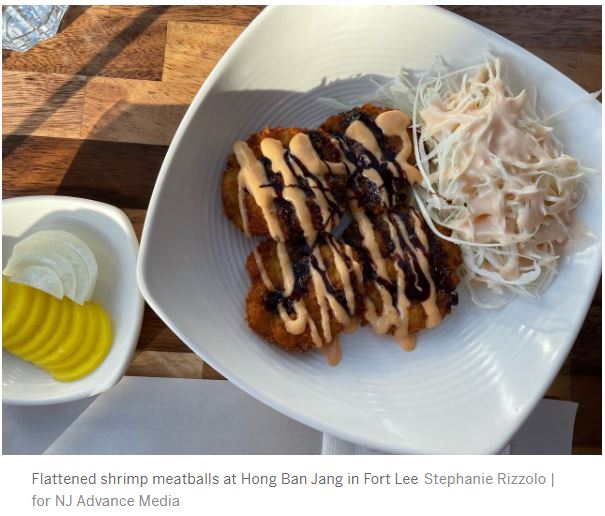 There were a few items that blew my mind at Hong Ban Jang. First up, the sae u wan ja, or flattened shrimp meatballs ($7). The word “meatball” threw me, but what arrived was so delicious I immediately forgave the inaccurate description. Meaty, crispy, all-shrimp patties flecked with scallion were breaded and deep fried, then finished with a drizzle of homemade spicy mayo and, get this, chocolate. Chocolate! From a flavor perspective it was nearly undetectable, but added some drama to the presentation alongside the spicy mayo. 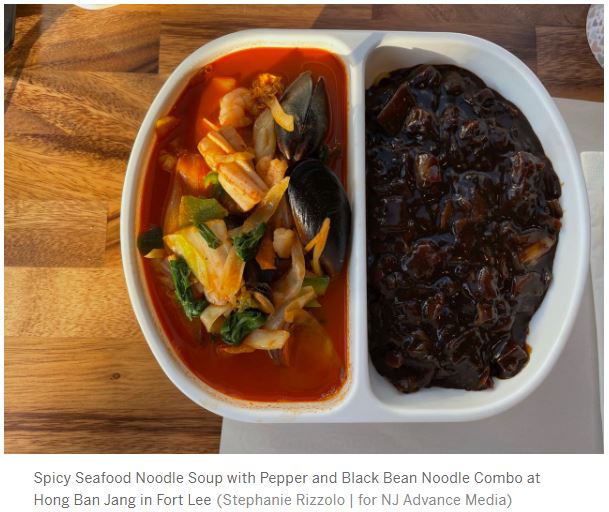 Next up was the hae mul jjam ppong, or spicy seafood noodle soup with pepper ($13). Since I had to try the alluring black bean noodles, the server proposed doing a combo, where I’d receive half portions of both. She then asked how spicy I would like the soup, and I went with medium, which I’d soon discover equated to very spicy (for my palate, at least). The soup itself was very flavorful, verdant red, and packed with mussels, baby shrimp and chunks of squid. I dug to the bottom with my chopsticks to fish out some noodles and ended up splattering my white t-shirt (rookie move). The hostess promptly arrived to the table with a Tide stick. Hong Ban Jang, you are good. 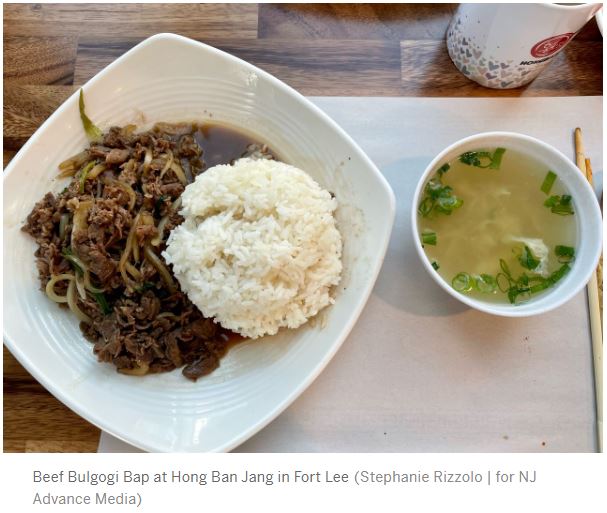 The dish I enjoyed most was was the bulgogi bap, or stir-fried, marinated beef ($15). It came with a forgettable and unmentioned side of egg drop soup (my only Korean-Chinese experience here) and a side of rice. I was offered fried or white rice and I went with the latter. That was more of a strategic decision versus being basic, and once the dish arrived, my strategy paid off. A sizable pile of delicate shaved beef, cooked with green onions in a slightly sweet but much more savory jus sat next to my glorious mound of white rice. Jus would be the correct descriptor because it was juicy and brothy, unlike some dishes that are covered in more viscous sauces. I loved this about it, mostly because the rice soaked it up with every bite. The beef was so tender and succulent, it basically melted into the rice. I found myself struggling to stop, grateful that this was the last dish to land on the table. 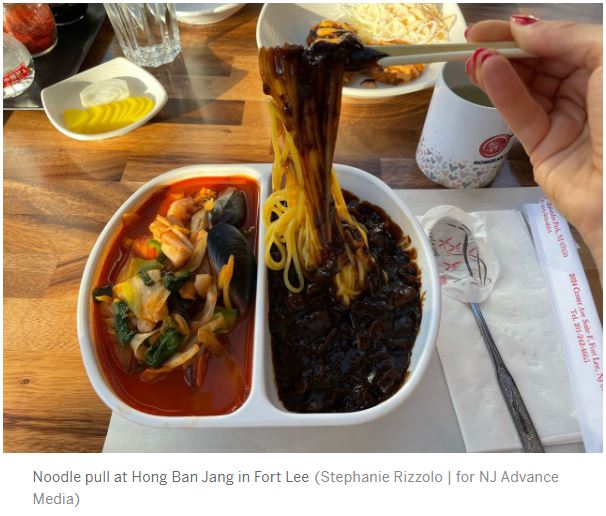 I know, you expected the jja jang myeon, or black bean noodles ($9) to be in the “good” section, since everyone in the restaurant was eating them. But the flavor of the sauce just didn’t do it for me. It was beany as can be, but far too sweet to eat more than one bit, let alone a massive two-pound serving. A thick shellacking of deep black, shiny, pumpkin-studded sauce completely covered the noodles below. I opted against the shears because I wanted to do it like everyone else, (and I already ruined my shirt once). But I struggled at the idea of polishing these off like my fellow diners, though I respect the cult-like following the dish maintains.

I had ordered a side of sautéed bok choy to round things out, but it never arrived. The ordering process was more of a conversation, so I could easily understand how the server may have thought I was asking about it versus actually ordering it. I’d come back to try some of the more Chinese-focused items, “done in Korean style,” and reorder the bulgogi.

Hon Ban Jang could be a new go-to spot for those in search of fuss-free Korean staples, friendly staff and fair prices. It’s a perfect locale for solo diners, couples or groups. The menu is much more Korean than Chinese, though it does not include Korean barbecue. The bulgogi was a star. Wear black, you’ll thank me later.

From our families to yours...⠀ May your Thanksgi

Come in👋👋👋 We are open for Thanksgiving D

Don't love spice but love the noodles? Try our 매